6 reasons why Etoile FC is going to win the Sleague... again... 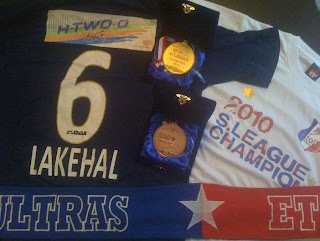 The second part of the season has started and already there are signs that are indicating that Etoile is probably going to snatch the Sleague championship a second time in a row. Here are 6 reasons why:

1. Defense
Etoile FC defense is by far the best in the sleague, just look at the number of goals conceded. Less than 0.6 goal/game. Ask any coach in the world and they will tell you that the team which concede the fewest goals is likely to win the championship.

2. Midfield
Belouet, Bouchemlal, Raymond, these 3 guys can play the ball with great skills (Belouet has already been approached by some SE Asian teams) and can score. No other sleague team got a trio like this one.

3. Attack
Well, many will compare the 2011 squad with last year one, it is stupid to do so. Both teams are completely different.
This year Etoile did not have a pure striker until Doumbouya arrived at mid season. Toto looked like one but he is not, he is versatile and can play both midfield and in front.
So who is Etoile's attacking man? The answer is the entire team, they all can score and already did:
Kaabi/Damiani/Tahli > 5 goals,
Bouchemlal/Raymond/Belouet > 13 goals,
Toto/Lefranc/Chaaouane/Doumbouya/Moulin/Grosset > 15 goals.
(goal scored in sleague games until 04Aug11)

4. The bench
Now if you remove the great Duric from Tampines, or Karoglan from SAFFC or Mendy/QiuLi from Home Utd, all these team will be falling to mid table. As for Etoile, well I guess playing and winning against Home United without 4 key players (yes 4!) or without 2 key players versus SAFFC (Bouchemlal and Chaaouane) says it all: Etoile can afford to loose some players for a game as the bench is just equally strong. No other Sleague team has such advantage other than Etoile Fc.

5. The infamous 5 points deduction
It may seems odd, but having 5 points deducted did not really affect the squad, it actually motivated them even more. If you look at world football statistic you will find out that never a team with 5 points deducted has ever won their respective championship. Etoile can (it is mathematically still possible) and they probably will. 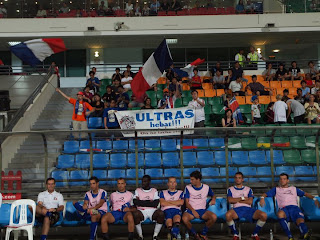 6. The ULTRAS
The ULTRAS fans are faithful and committed to Etoile Fc, sometimes only a handful are at the stadium to support the boys but there always will be ULTRAS fans 'to support no matter what'.

Etoile FC currently finished in 5th Position in the 2011 Sleague.
*Etoile FC was deducted 5 points by FAS Disciplinary Committee otherwise they would have ranked in 3rd place.

Etoile Fc pro team is not participating to the 2012 Sleague.

Add a PicBadge on Your Facebook Profile Picture. Support the Ultras!

....and introducing our Youngest Ultra and Committee Member, Baby Louis

Do send an email to http://www.blogger.com/etoilefcfans@asia.com should you have any queries or just want to find out how to be part of the Etoile Ultras Team.