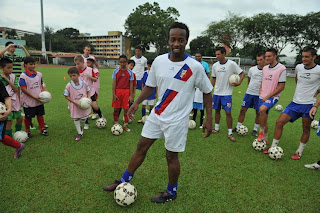 Etoile Fc ambassador Sidney Govou held a football academy last Thursday and Friday. More than 30 kids age ranging between 8 to 16 years old got to get up close to demonstrate their skills and learn new ones. The feedbacks from the participants and the organisers are indicating that such event may occur again. More details and photos here http://www.tnp.sg/content/govou 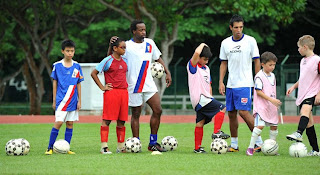 The ULTRAS got time to meet and talk to Sidney and his brother, they both really enjoyed Singapore and has fun teaching and training the kids during the academy. 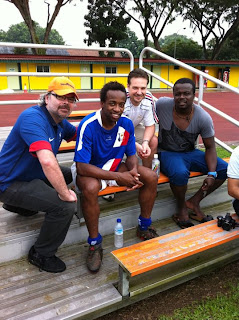 On Saturday 12th June, a private pratice was organised between Etoile FC players, the ULTRAS / Etoile fans and Sidney Govou at the Queenstown Stadium.

Overall it was a big success and the ULTRAS hope that Etoile Fc management will reconduct such event in the future. Bringing world class football to Singapore and the Sleague by having players coming and getting them involved on local football pitches.

Now we are waiting for Laurent Robert, busy week for Etoile FC and the ULTRAS! ;)
Posted by Etoile FC Fans at 1:07 PM

Etoile FC currently finished in 5th Position in the 2011 Sleague.
*Etoile FC was deducted 5 points by FAS Disciplinary Committee otherwise they would have ranked in 3rd place.

Etoile Fc pro team is not participating to the 2012 Sleague.

Add a PicBadge on Your Facebook Profile Picture. Support the Ultras!

....and introducing our Youngest Ultra and Committee Member, Baby Louis

Do send an email to http://www.blogger.com/etoilefcfans@asia.com should you have any queries or just want to find out how to be part of the Etoile Ultras Team.